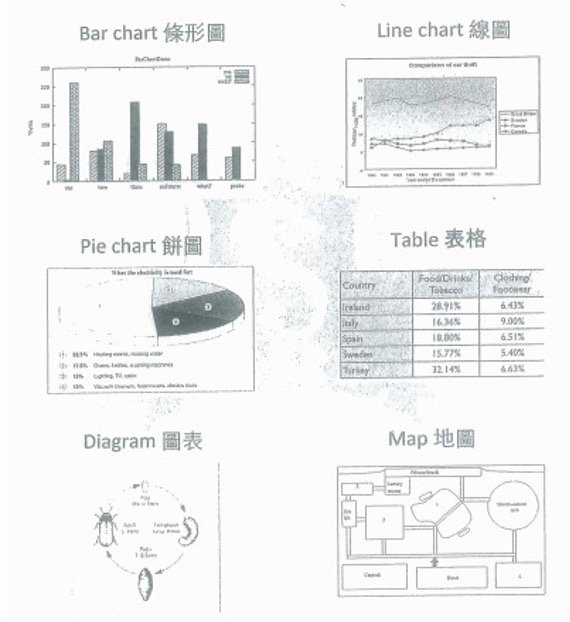 Based on the information provided in the (type of graph/diagram),

In contrast to the trend for fitems in big trend), [sentence about 3a]

Note: if there are more than three items

In contrast to the aforementioned

In summary, [paraphrase a main trend], and (major contrasts).

6分的答案: The below chart shows the trend.

7分以上的答案: A glance at the charts provided reveals the trend.

While Europe enjoys a relatively high level of education overall, it seems that people in less affluent regions are far likely to be educated.

The table shows the percentage of households with various électronic products in New Zealand in 1996 and 2002.

Overall, the percentage of households with five type of electronic products increased-by varying degrees, while that of fax machines, desktop computers and radios fell significantly and that of washing machines stayed the same

Latin America and East Asia, meanwhile, have moderate levels of education-between 40 and 50 per cent of both sexes.

Latin America and East Asia, meanwhile, have moderate levels of education-between 40 and 50 per cent of both sexes.

Statistics Figure illustrates that the number of plastic surgery operations performed on Korean Men
and Women in the year of 2004.
Summarize the information by selecting and reporting the main features, and make comparisons where
relevant.

Write at least 150 words
Given are the figure illustrator. 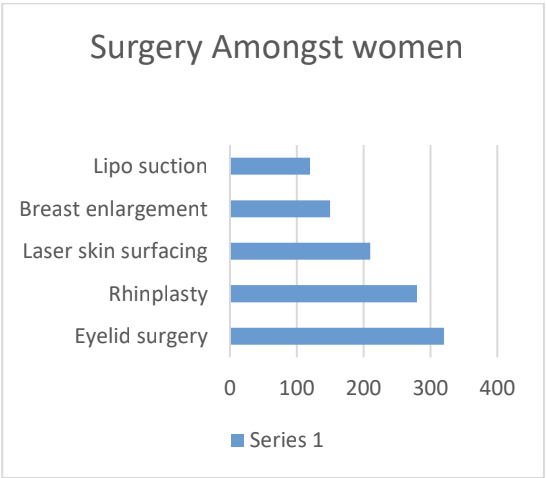 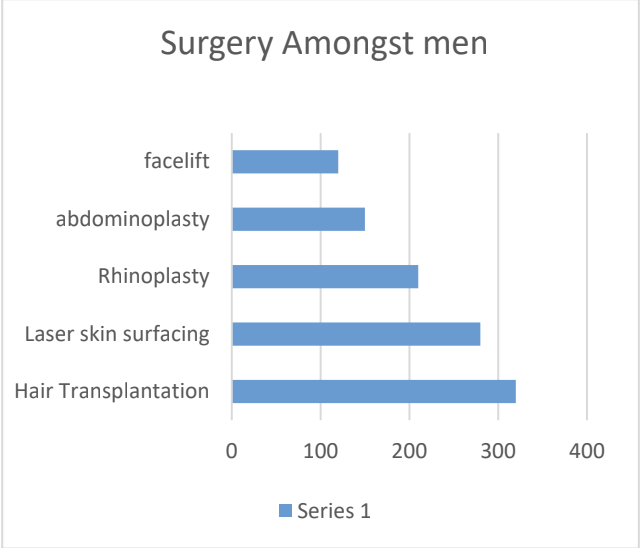 Not surprisingly plastic surgery enjoyed widespread popularity amongst women. By far the most common forms of cosmetic procedure for this group, eyelid surgery and rhinoplasty were performed staggering 320,000 and 275,000 respectively. Third in terms of popularity, was laser skin resurfacing. An approximate of 215,000 of these procedures were conducted on women during the year in question. Breast enlargement and liposuction were considerably less common at 145,000 and 120,000 operations respectively.

Equally predictable is the fact that plastic surgery was far less popular among men. In Contrast to women, hair transplant was most common cosmetic procedure.

There were just 60,000 of these operations among Korean males. Numbering 55,000 procedures, laser skin resurfacing was second for this group. Third was rhinoplasaty and 14,000 facelift procedures were carried out on men during 2004.

Worth mentioning that hair transplantation, abdominoplasty and facelift patients were exclusively male whilst 100 percent of liposuction, breast enlargement and eyelid surgery were female.

The graph below shows radio and television audiences throughout the day in 1992. Write a report for a university lecturer describing the information shown below. 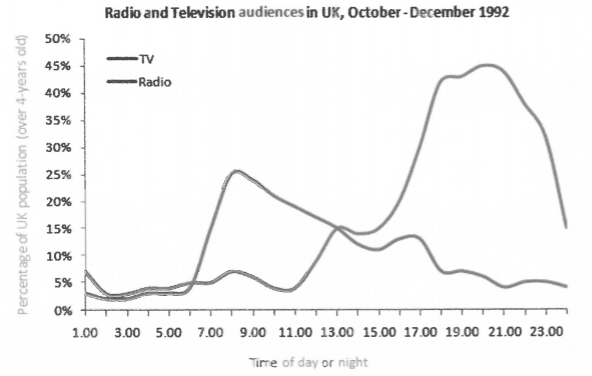 The blue graph shows the television audiences throughout the day. It shows that the percentage of audiences is three percent in early morning but it gradually rises to ten percent at 8:00 am and maintains the same for the next two hours. There is a slight fall in percentage in next two hours however after that it raises sharp unto twenty percent within the next two hours. After this, the graph rises very fast and attains its peak at 10 pm which is about forty-five percent. The graph gradually falls down and at 2:00 am it is at five percent.

These graphs prove the progressive popularity of television.

The given pie charts compare the expenses in 7 different categories in 1966 and 1996 by American Citizens.

Write a report for a university lecturer describing the information shown below. You should write at least 150 words. 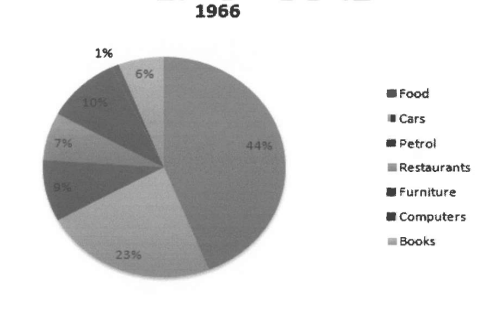 It is evident from the information provided that foods and cars made up the biggest proportions of spending among Americans in both years. Specifically, in 1966, the highest proportion of expenses went to food with 44% of the total expense, followed by cars with 23%. After 30 years, this figure observed a reversal when the spending on cars accounted for a massive 45% while that for food dropped to just 14%.

Turning to the other expenses, petrol and furniture stood for roughly equal proportions of money spent with 9% and 10% respectively in 1966 and both 8% in 1996. The expenditure for restaurants experienced an increase of 7% in 1966 and a double to 14% after 30 years. It is also interesting to note that the spending on books and computers changed conversely. Over the 30-year period, the figure for books declined from 6% to a negligible 1%, in contrast, money spent on computers underwent a remarkable growth from 1% to 10%.

In short, Americans spent most of their money on food and cars in both 1966 and 1996, and the spending on computers increased considerably after 30 years.

The figures below compare the number of internet users in several European nations as well as the prevalence of online shopping in these countries.

Summarise the information by selecting and reporting the main and make comparisons where relevant.

The given table provides data about the underground rail transit systems in six different cities namely London, Paris, Tokyo, Washington DC, Kyoto and Los Angeles. The statistics provided are the year opening the railway systems, the kilometres of route and the total number of travelers per year in millions.

As is given in the table, London railway service was the first to launch compared to other five cities, i.e., in 1863, and it covers a total distance of 394 kilometres. By contrast, the city of Los Angeles has the newest underground railway, which was opened in 2001, and it falls under the second least used with mere 50 million commuters and the second shortest length with just 28 kilometers, whereas the Kyoto railway system stands at the last spot with 45 million people and 1 1 kilometers length respectively.

Interestingly, the Tokyo rail transit system which was built in the year 1927, has the highest number of passengers, which accounts for 1927 million followed by Paris with a large user base of 1191 million.

Overall, it can be inferred from the presentation that most of the early built and longest rail routes have significantly higher number of passengers, compared to modern and short length transit systems.

The diagram below shows how the French Construction Bureau collects data on construction sites. Summarise the information by selecting and reporting the maln features and make comparisons where relevant. 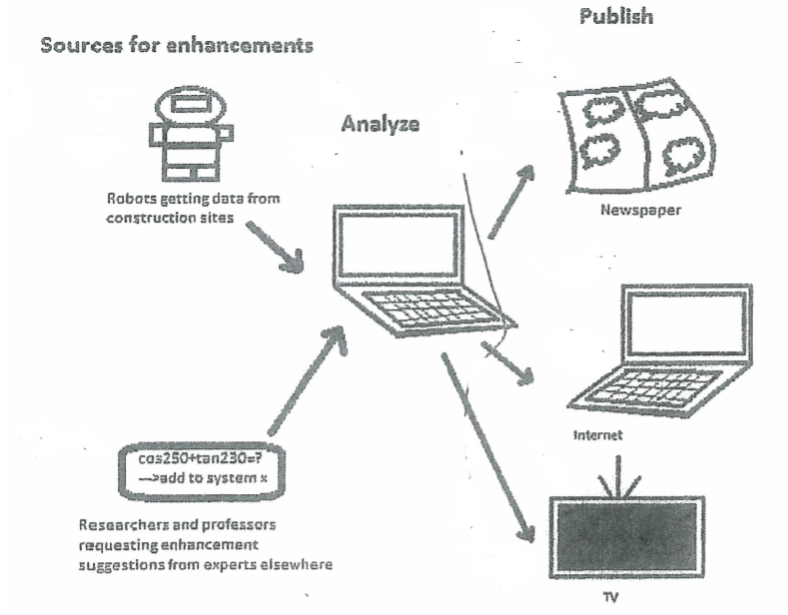 The diagram presents information on how the French Construction Bureau collects data on construction sites. Overall, data is collected from two main sources before it is analysed and
published as useful Information via various channels.

Based on the information provided in the diagram, two main sources provide the input of raw data and suggestions for enhancements of construction projects. Robots are one of the two main sources and they get raw data directly from construction sites. Simultaneously,
researchers and professors working in the Bureau cooperate with experts globally to generate new ideas and find solutions to enhance the efficiency and effectiveness of various construction projects. Analysts at the Bureau then gather the data and suggestions, based on which they perform meaningful analysis.

After the professionals have analysed the data and come to a conclusion, they will prepare the findings in a way easily understood by the public. The findings and conclusions will be published in the media. Readers can expect the findings in the newspaper or online. Alternatively, the audience may wait for a detailed documentary on television.

In summary, the French Construction Bureau performs three main steps, with a view to sharing with the public the ways to enhance construction projects

According to the map,

As shown in the map…

As can be seen from the map,

It is clear/apparent from the map (that). …

In the (direction), there is a.

In the (direction), there lies a…

To maintain objecuivity, you should avoid using ‘we’ in phrases such as “we can see from the diagram that”

The two maps below show an island, before and after the construction of some tourist facilities.

Summarise the information by selecting and reporting the main features, and make comparisons where relevant. 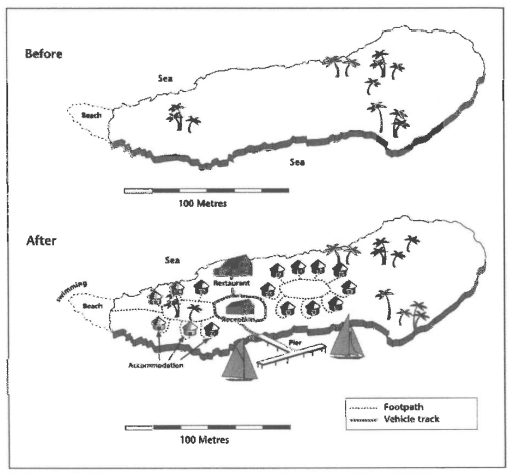 The two maps illustrate the changes on an island due to the constructions and adaptations made for the tourism activities. In general, the island became more crowded with entertainment facilities after the introduction of tourism.

In the first picture before the construction of tourist facilities, there was no accommodation and the whole island had almost nothing except few trees. Furthermore, the area was completely calm and quiet.

However, turning to the second picture, this island provides a lot of accommodation facilities and a large restaurant. The reception block is located close to the restaurant and these buildings are linked through vehicle tracks. From the reception centre, people can go to the pier through the vehicle track. Moreover, the swimming area is also available near the beach for visiting tourists. Tourists can walk on the footpath to reach the beach from their cottages.

Overall, tourism facilities made greater development on this island, while it became congested. However, it is good no notice that trees were not chopped down during the renovation works.